Site of tracks for between 30 and 35 million years, which corresponds to the passage of mammals.

The geological and climate then led the transit of animals that supposedly came to be watered in Castelltallat.

The site is next to the road that descends from the Sierra to Cal Prat Barrina.

The Serra de Castelltallat is located between the west and south of Bages Solsonès. Most of the mountain belongs to the municipality of San Mateo de Bages while the western part lies within the municipalities of La Pine and Molsosa.

The village of Castelltallat was a municipality until 1840 and since that year was part of San Mateo de Bages is now a parish.

The parish church of San Miguel located at altitude 887 goals and made at the foot of the ancient castle of Castelltallat, contains samples of architectural styles Romanesque, Renaissance, Baroque and Neoclassical. 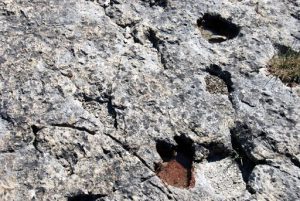 Improvement with the installation of photovoltaic panels and new bungalow accommodation at Camping Cal Paradís de Salo. Action of the Rural Development Program of Catalonia 2014-2020.